You perform backups too, don’t you?

Does your company make backups of all its data? Splendid! Your situation is, however, exceptional. For only 1 SME out of 6 makes regular backups, while 1 company out of 3 loses digital data every year. It’s time to take action. We’ve listed the different options for you.

For an SME, there are roughly four methods to backup data: on a data carrier, on an external hard disk, on a fileserver or via online backup. Let’s briefly run by these four methods.

On a data carrier

Performing a backup on a data carrier like e.g. a CD or a DVD is generally the cheapest method. It’s important to always use a good backup programme – preferably one that performs its backups automatically. Microsoft Backup is included in each version of Windows. Do however take into account that you need to swap CDs and DVDs and to keep them in a safe location. Moreover, these disks only have a maximum lifespan of 4 to 5 years and the slightest scratch can ruin all your efforts.

On an external hard disk 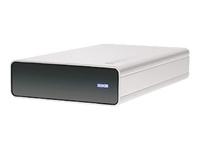 Make a full backup at the end of each day. Thus, your maximum data loss can never be larger than one working day’s data. It’s also advisable to assign backup management to someone within your company.

A fileserver is located on the company premises and performs a daily backup of all files. A basic version with a 250 GB capacity will easily cost you 2,500 euros or more. A fileserver works with all versions of Microsoft Windows and usually has a low energy consumption.

What is referred to as ‘Network-attached storage’ builds further on the principle of a fileserver. It’s a storage medium that is linked to the network in the same way as a computer or a server is. This type of device is rather meant for companies with bigger storage needs that generally run in the terabyte range. Because of the fact that NAS storage is a part of the network, backup software can make a copy of all computers and servers connected to the network. Despite the fact that storage rates go down steadily (consequently, the same goes for NAS), you should expect significant overheads in the region of several thousands of euros if you choose this option. Yet this might be a little too much of a good thing for the average SME. 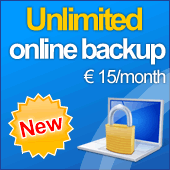 With online backup, you don’t store your files locally but they are stored with an external party. Via a secured Internet connection, your files are stored in an encrypted form on servers located in an external and secured data centre. After having walked through a wizard once, a backup of your files is made automatically and at the times you have selected. So you don’t have to do anything and you don’t have to bother with limited storage capacity. If that is your wish, you can be notified by e-mail after every automatic backup in order to ascertain that the backup has been performed correctly. That way, you’ll be sure that you’ll never lose data again. This type of storage is not the least bit expensive. COMBELL offers online backup as from 5 € per month for a capacity of 5 GB and for only 15 € per month for an unlimited capacity.

What to choose?
We don’t have to convince you anymore that you need backup. Now it’s just a matter of deciding how you will perform your backups. To help you make this decision, it’s advisable that you perform a concise risk assessment. Make a list of ways in which your company could lose data. Think of human errors, theft, vandalism or crashes for instance. And, while you’re at it, ask yourself if you shouldn’t rather focus on your core activity. Online backup is the nearest thing you can get to an absolute guarantee not to suffer data loss ever again. And if you pick this solution, for a limited fee per month, you don’t even have to waste your time performing backups. Besides, you’ll have to admit that such a small monthly fee is nothing compared to the financial uppercut you could get from losing your company’s data…

What is Artificial Intelligence, and how can it help your company stand out?

Artificial Intelligence seems like a concept straight out of a sci-fi movie, but we are actually exposed to it every day. What is AI exactly?

Cloud computing, what could it do for you?

The concept of cloud computing is on everyone’s lips. But what is it all about? And would it help your business? Come with us on a journey to the cloud!