Combell sponsored the sixth edition of the PHPBenelux Conference

As in previous years, the PHPBenelux conference was held on 23 & 24 January in Edegem. The event, in which Combell evangelist Thijs Feryn has been participating from the start, is now in its sixth edition.

After an extraordinary jubilee edition in 2014, expectations were very high. Everyone still remembers the bumper cars and some people were even a bit disappointed not to find them in this edition. But hey, the PHPBenelux crew had other sweet surprises in store!

For this edition, we decided to sponsor the drinks that have been served on Saturday evening – a choice that was deeply appreciated by all the participants. So far, we have always been sponsoring the conference in one way or another and we are already looking forward to supporting the PHPBenelux crew for the 2016 edition.

10 of Combell’s staff were present: Thijs Feryn, who is involved in the management committee and organises the event, Brecht Ryckaert, who helps organising the event on a volunteer basis, and the others, who attended the various sessions or the social on Saturday evening.

After a few tutorials on Friday morning, the conference kicked off with an inspirational keynote speech by Yitzchok Willroth, an American rabbi with extensive knowledge in software development, who shared his wisdom by reading some “Talmudic maxims”, i.e. Jewish writings that, surprisingly enough, also apply to the life of software developers.

This session was a huge success and the feedback was incredibly positive. The keynote speaker left such a great impression that a few people have decided to create een nieuwe PHP user group in Leuven.

The conference stands for technical talks, influential speakers and relevant content. This year, the feedback on the various presentations was again very positive.

A wide variety of topics were addressed: 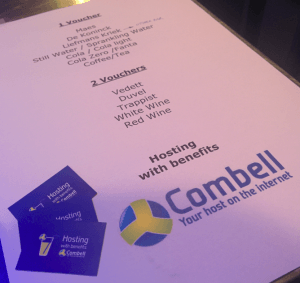 The socials and the ambiance

It is no secret that the PHPBenelux crew attaches considerable importance to the socials on both Friday and Saturday evenings. It is in fact the perfect opportunity to meet old friends and make new contacts. Almost 400 people were present.

Drinks were free (sponsored by Combell on Saturday), there were the legendary French fries, and there was entertainment for everyone. The PHPBenelux crew even had a casino night, with professional devices, croupiers, and obviously great prizes.

Each sponsor had an attraction on its stand that visitors could enjoy during both the socials and the breaks. There were darts, table football, a pool table, drones, Playstation 4… And even a real surf simulator.

The public comes for the presentations, but stays for the social contact. That is actually the community’s purpose. Some renowned members of the PHP community that were not chosen to give a talk at the event have also set an example by coming anyway, at their own expenses.

The “closing notes” are a real highlight: sponsors, speakers and volunteers are warmly thanked. The tradition also dictates that a rough cut of the video compilation of the event should be watched by everybody. Unfortunately, the video made Thijs’s laptop crash, but he promised that the pictures would be available soon. And a promise is a promise: you can find the result here: https://vimeo.com/117694237. Our very own Brecht Ryckaert also shot many scenes using his drone. You can find them here: https://vimeo.com/117726758.

Many great prizes have been won: an iPhone 5s, drones, a Playstation 4, software licences, conference tickets... So there were definitely reasons enough to stay.

But this time, the PHPBenelux crew had yet another surprise in store: illusionist Stephan Siro. This guy delivered a short but very amusing performance, whose central theme was the same as the conference’s main theme: “show time”! After his act, he continued to entertain the public who attended the social with some more clever tricks.

This edition of PHPBenelux was definitely a huge success and it sold out faster than the previous year. We are already looking forward to the 2016 edition!

Everyone's taste is different. But for those who would still like to design their website 'by the book', we have a few helpful tips!