An external hard drive is an unreliable backup system 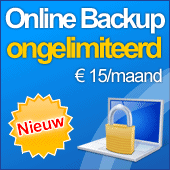 Norman Datarecovery repairs damaged hard drives. During the first quarter of 2008, the company noticed that the number of damaged hard drives had tripled in comparison with the first quarter of 2007. The problem is mostly related to cooling. Unlike their internal brothers, most external hard drives do not have a cooling system. Because many users often leave them running for hours on end, they overheat. Other frequently observed problems are malfunctions due to wrong connections to the power supply, dropping the machine or moving it too often. Some numbers indicate that 13% of external hard drives already break down during their first year of service.

So don’t use an external hard drive as your sole means of backup. Think of Murphy’s law and use a supplementary backup system, like e.g. Online Backup. COMBELL offers automatic online backup as from 5 euros per month.

E-mails often do not reach their recipients or end up in spam folders. Our experts give you some tips to ensure your e-mails arrive safely.

Why a professional e-mail address matters

Communicating from your business using free mail addresses ... Well, we're not going to do that anymore. Do we agree? We'll explain why.

What is Artificial Intelligence, and how can it help your company stand out?

Artificial Intelligence seems like a concept straight out of a sci-fi movie, but we are actually exposed to it every day. What is AI exactly?