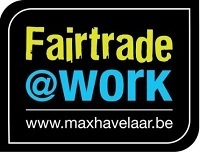 Fairtrade Breakfast
Last Thursday, all the members of the Combell team (or, at least, those who managed to get out of their bed) enjoyed a delicious fair trade breakfast. All the colleagues were spoilt with exquisite coffee or fruit juices, but also with fresh fruit, chocolate, breakfast cereals, etc.

Combell commits to support fair trade but also wants to give its collaborators all reasons to keep dedicating themselves to their job at Combell during their entire professional career, which makes this Max Havelaar initiative a perfect combination of both objectives. 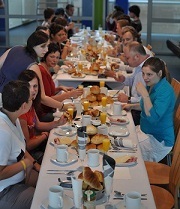 With its “Principles for social entrepreneurship (SE)”, Combell engages in a growth process through which, in collaboration with its collaborators, customers and suppliers, it aims to achieve its economical, social and ecological objectives.

Combell believes that, owing to their capacity to innovate and the potential exemplary role they play for a large number of consumers, IT companies can significantly contribute to a sustainable world. Combell commits to introduce a sustainable acquisition and recycling policy, from IT accessories to culinary goods, within the company.

Combell plays an active role in supporting communities, in the form of collaborations and ad hoc actions, both in Belgium and beyond. With this event, Combell wants to support the fair trade farmers in developing countries so that they too can spread something on their bread.