Attention: your footer has become important! 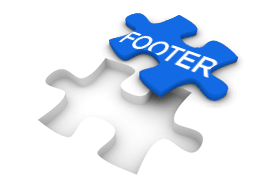 Whereas in the past, Internet users mainly focused on what was “above the fold” on a website, they now browse other parts of the site, which means that the footer has also gained significance. Here are some explanations on this subject…

Once, there was a time when web designers believed that every important content had to be “above the fold”. This way, Internet users could immediately see everything worth anything on a website when they landed on the homepage of the site. The limit of the space available “above the fold” was set by the lower edge of the screen. Forcing users to use the scrollbar to navigate the site and find more content was considered a serious mistake, because users would just be of a lazy nature, and they would not be too keen on scrolling.

But those times are over now, as shown in a recent study by Content Square, for which 50 million Internet sessions have been examined. Nowadays, users browse and scroll through all the available content, so much so that the footer is becoming more and more important.

There are a number of reasons for this. First off, users surfs more and more the Internet using tablets or smartphones, whose screen size is limited. So, they are forced to navigate across the screen if they want to browse all the content that is available on the website.

Moreover, social networks, whose content is constantly updated, have learned users to scroll down to the end of a page. Users now definitely feel the urge to read more and more content.

And finally, the footer has become the ending point on which the eye of the users are set when they have scrolled all the way down the screen with their big clumsy fingers.

The figures prove this. Whereas three years ago only 3% of visitors made the effort to scroll all the way down to the footer on an e-commerce site, that percentage has now risen to 15%. The increase was most pronounced for tablet users; only 5% of desktop users have reached the footer.

So, take this into consideration when you design your e-commerce site. You do not have to place banners above the fold anymore - coupons and special discounts can also be included in a footer. That is indeed the point where the page stops when people scroll down using devices that are equipped with a touchscreen. Make the best use of it!