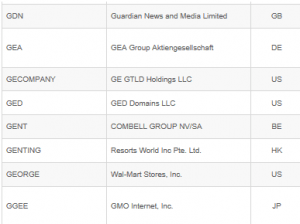 Yesterday, the ICANN published the list of all the applied-for new domain extensions. There are no less than 1,930 applications, including 66 for geographic Top-Level Domains. Combell is also mentioned in the list, since we applied for the .GENT domain extension, with the support of the City of Ghent.

Applications come from no less than 60 different countries, including 911 from the US and 675 from Europe. Among the applicants are many trademark owners such as .deloitte or .microsoft, but also many generic TLDs such as .app, .architect, .vip or .hotel. Closer from home, there is .gent, .brussels and .vlaanderen for Belgium and .amsterdam, .frl (Friesland), .overheidnl and .politie (among others) for the Netherlands.

In the coming weeks, the ICANN will evaluate the applications and the first new domain name extensions will probably be online in early 2013.