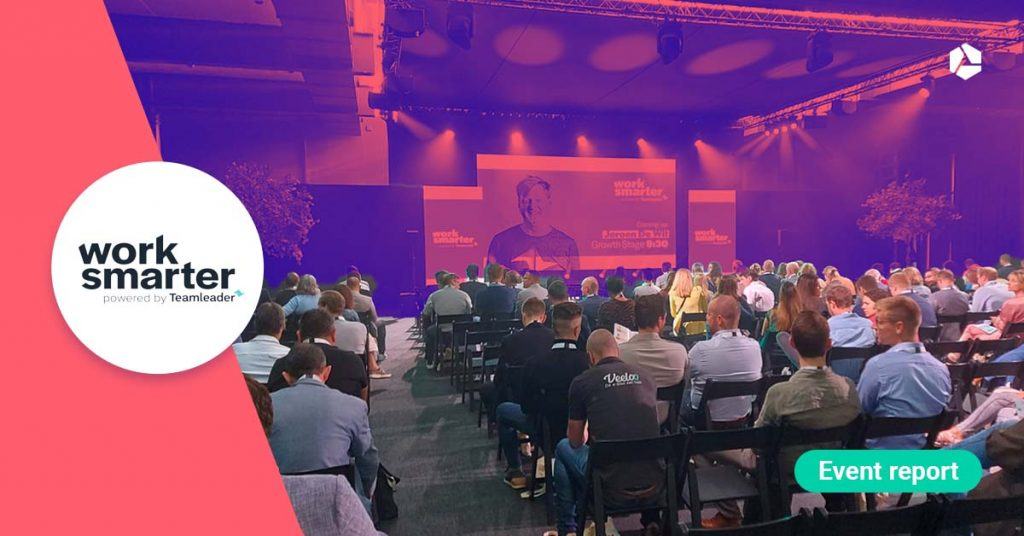 On Thursday 16 September, Flemish entrepreneurs were once again allowed to attend public events – like Work Smarter (@ Flanders Expo), Teamleader's entrepreneurial event, which we are once again very proud to support as a partner. This very special day was a perfect opportunity to listen to inspiring speakers, make new contacts and gain valuable insights. Here is an overview of this event where everyone had a lovely ride!

'On a roll' was Teamleader's theme for the day. And this was most certainly no coincidence, as the Teamleader team undoubtedly includes some passionate cycling fans: earlier this year, we saw that the winner of the points classification in the Benelux tour was wearing a Teamleader jersey on his shoulders. And at Work Smarter, the most loyal customers also received a cycling jersey, and there was even a racing bike to be won.

The whole day was a lovely ride, from employees on roller skates to the smooth running of very interesting lectures. Check out the photos on our Facebook page!

Sven Nys, one of our best cyclists ever, came to tell us how everyone can become a winner. And we would like to share one of his open secrets with you: set the bar at the right level for yourself, and do not forget that sports are important for your physical and mental health. Okay, that's two secrets 😉.

This aspect – mental health – was mentioned by many other speakers, and rightly so. Elke Geraerts (Energy Lab), for instance, advocated reinventing teleworking, in order to cope mentally with the lack of stimuli or distractions usually found at the office. According to Geraerts, we are entering a new era in which teleworking will no longer be an exception.

We can learn a lot from the past year and a half to better prepare ourselves for unexpected turns in the world in the future – which many speakers referred to as the 'black swan'. Former Telenet CEO Duco Sickinghe was even quite explicit about this: "Only the paranoid survive."

"Only the paranoid survive."

Harry Demey, CEO of LDV United, pleaded for more attention to be paid to the emotional factor. His talk was appropriately titled 'Fuck dashboards': marketers should dare to stop using dashboards with figures and results, and realise that there is a person behind each of these numbers.

In other words, Demey believes that if you focus on 'seducing' those people, the long-term results will automatically follow. Because, to use a visual analogy, if you ask someone to have sex with you on a first date, you will have a small chance of getting lucky, but you will probably not end up in a long-term relationship 😉.

Steven Verbruggen (Adsomenoise) also confirmed this distrust of numbers. According to Verbruggen, marketers should watch out for Death by KPIs. Because when we combine creativity and technology, magic can definitely happen. But if we put too much pressure on that combination to 'get numbers', that magic will instantly vanish.

In other words: focus on creativity. Especially in a world where content is thrown at you by torrents. According to vlogger and marketer Hannes Coudenys (Hurae), good content is the holy grail to stand out from the crowd.

Teamleader CEO Jeroen De Wit exuded much enthusiasm in his speech, but all employees and attendees were also clearly happy to be 'outside' again. Finally, networking 'in real life'… And we were delighted too!

Because where people work smarter, Combell is obviously there too 😉. Would you like to find out how your company can work smarter?