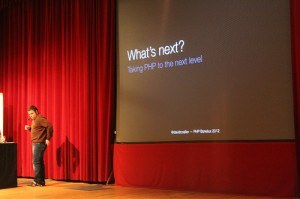 On 27 and 28 January, the conference centre Ter Elst in Antwerp was invaded by the cream of the crop of PHP specialists. There, the PHPBenelux User Group organised its third conference. Of course, top speaker and Combell evangelist Thijs Feryn also took the floor. Just like many other renowned international specialists.

If you do not feel like reading the whole story, check out the video. Or the pictures.

PHPBenelux is a fully fledged and much respected organisation. And that was reflected by the impressive list of speakers: Matthew Weier O'Phinney (the inventor of Zend Framework), Fabien Potencier (the inventor of Symfony) and Derick Rethans (the inventor of Xdebug) indeed shared the stage. Besides them, many community leaders and PHP rock stars also took the stage. Empty seats were hard to find inside the whole conference centre. And after the event, many international guests declared that PHPBenelux was on top of their list of favourite conferences.

Friday morning, five workshops were held simultaneously. During three hours, participants plunged into hands-on tutorials about Zend Framework 2, Symfony2, mobile development, HTML5 and Microsoft Azure. After lunchtime, keynote speaker Ian Barber had no difficulty to catch the participants’ attention. His speech “How To Stand On The Shoulders Of Giants” is a hot topic here too. The final speaker on Saturday was David Coallier. With “Taking it to the next level”, he managed to seduce the whole crowd. So many matters to discuss afterwards.

Afterwards, there was definitely a lot of talk. Conference socials are perfect opportunities to establish new contacts and to chat with old acquaintances. Due to the growing international interest in the event, PHPBenelux decided to include some typically Belgian classics during the two social events.

The official PHPBenelux conference social took place on Friday evening. The authentic Belgian ‘fritkot’ was invaded by the Belgians but especially by foreign connoisseurs. In the bar next to it, regional beers flowed like water, especially Duvel and La Chouffe. Of course, participants also played bowling again. But once more, it was not clear which variant had the most fans: the real game, or the Microsoft Kinect version.

The after party on Saturday was new, but seemed to be just as successful. Nothing is more logical: who does not like a winter barbecue with jenever and mulled wine? Between eating and drinking, enthusiasts also had the opportunity to play a game of winter pétanque (with real pétanque balls, not virtual ones).

During the whole weekend, on the Combell stand, participants were given a free PHP hosting packet and free chocolate treats shaped in the form of the Linux logo. Because with chocolate, of course, you always score big!

Ugly Belgian Website or not: Combell takes care of everyone

Everyone designs their website the way they want. But the most important thing about a website is that it runs smoothly and that it is secure.