The number of data centres grows rapidly along with the increasing demand for data storage and the growth observed in the professional sector of Internet. Owing to this evolution, for ecological and economical reasons, new concepts such as ‘high density’ and ‘structured cabling’ are introduced in a server room. 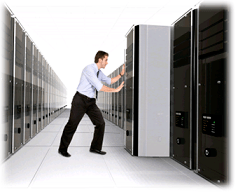 Combell’s new private room at Interxion is already entirely built according to high density principles. By using cool aisle containment, which means that warm and cold air zones are kept separate, an electrical capacity of 32 amperes per rack instead of 16 can be supplied. Concretely, this represents a method upgrade that has to be taken even further on the level of hardware choices and ‘structured cabling’ principles. The more everything is concentrated in the actual racks, the more dangerous the operations in such racks become. “We cannot afford to use cables that are a few centimetres too long, because this would create a mess in the racks”, says Benjamin Jacobs, CTO at Combell. “If you would then have to move a cable or perform another operation, the risk of committing mistakes would increase. Picture the difference between a disorganized cluster of cables and a nicely rolled up cable: the risk of making knots is much higher with the disorganized lot. Combell chooses to cable all its racks in advance in as orderly a fashion as possible. We work with patch racks to establish the necessary connections between the racks.”

Power User Efficiency
In order to test efficiency, the PUE (Power User Efficiency) system was implemented; it allows us to compare the state of insulation, power loss, etc. for different data centres. Consequently, we try to reach as low a value as possible. Indeed, PUE1 is the equivalent of 100% efficiency.

Scalability in the Cloud
“The difficulty on the level of capacity planning for such a data centre is mainly that it isn’t simple to predict a certain growth, since one can place even more servers in one same rack thanks to Cloud computing. This, however, strongly depends on the ratio of Public Cloud servers over Private Cloud servers,” Jacobs explains. “It is important to always have scaling possibilities at one’s disposal, since infrastructures that are too small surely represent a risk for your Cloud hosting services.”

Traditional hosting or containers with Kubernetes? And should this latter option involve a hyperscaler?

Containers and Kubernetes are a popular hype with undeniable advantages, but is it the most interesting solution for your project?

Our Platforms team: the backbone of your web hosting

All the features that you can enjoy on our web hosting have been imagined and developed by our Platforms team. Let's take a closer look.