Combell is still Belgium’s main registrar for .be domain names

DNS Belgium has published new figures on .be domain names, as well as on .vlaanderen and .brussels domain names. The time has therefore come to spot a few trends. Did you know that the longest .be domain name is 63 characters long? And that Combell is still Belgium’s main registrar for .be domains? Here are the answers to some interesting questions…

How many .be domain names are there?

What about the percentage of .be domain names compared to other domain extensions? 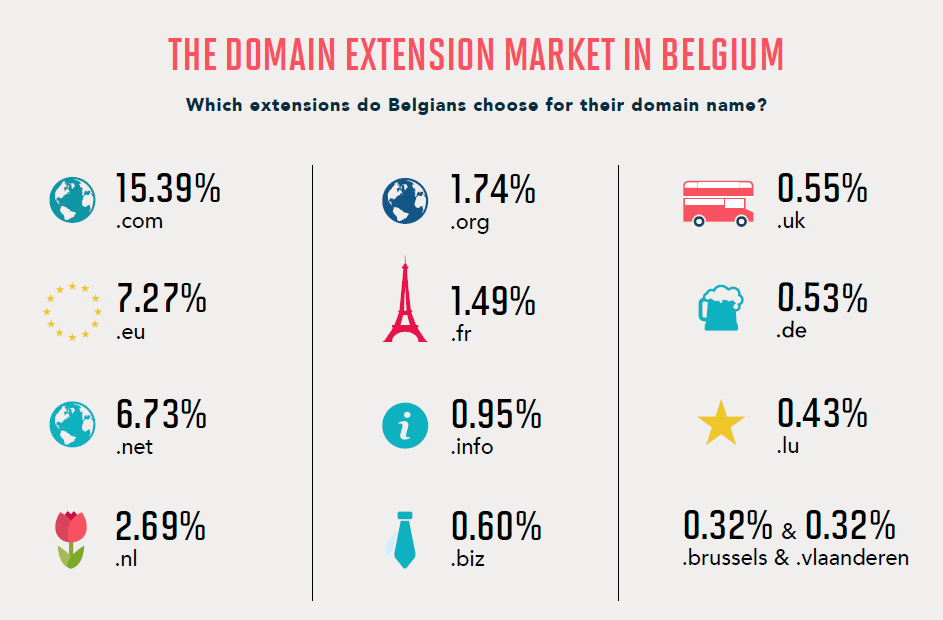 What are .be domain names used for?

.be domains are not registered merely as investments, in order to hold them for future projects, as their owners actually use them. The number of private individuals and companies that use a domain only for their website or e-mail has been decreasing over time, while the percentage of domain names used for both purposes is steadily increasing.

Who registers .be domain names?

It makes sense that the majority of .be domains have been registered by companies: 72.54% of .be domains currently belong to a company, the remaining 27.46% being held by private individuals.

However, the actual use of domains by private individuals appears to be increasing. In 2016, the number of domains that are merely used as a ‘holding page’ for a company has increased by 9.96% compared to 2015. On the other hand, the percentage for non-commercial sites has decreased by 2% over the same period.

The number of .be domain names used for websites has decreased by 6.84% for companies, but it has increased by 3.02% for non-commercial sites. Personal and family sites and blogs grew by 0.76%.

Another thing to keep in mind: the gap between Flanders, Brussels and Wallonia is still very much present. Flanders still hold more than 70%, Wallonia are right under 20% and Brussels achieves a little more than 11%.

And what about .vlaanderen and .brussels?

What is striking here is the nationality of the company or the private individual that registered a .vlaanderen or .brussels domain. While 68.23% of .be domains were registered by a Belgian entity (followed by 18.18% of Dutch entities and 5.03% of French entities), .vlaanderen and .brussels have a much more local dimension. .vlaanderen are registered by 91.4% of Belgian owners and by 8.54% of foreigners, with the Netherlands in the lead (60.20%). For .brussels, there is clearly a more European appeal. 86.28% of domain holders are Belgians, and of the 13.72% foreign domain holders, 16.48% are Dutch, 16.37% French and 12.15% German.

With what registrars have the .be domain names been registered?

In 2016, the number of Belgian registrars that were accredited to register a .be domain has slightly decreased compared to 2015 (240 versus 253), but the total number of domain names that they manage remained almost constant (34.25% compared to 34.72%). This clearly shows a consolidation of the number of players in the Belgian market.

Fun facts about .be domain names!

To end this list of interesting yet bare figures, here are a few facts that you can later share with your friends. Did you know that the longest .be domain name is 63 characters long? Two domain owners also totally forgot about the “shorter is better” principle, and went for these almost unmemorable domain names:

The Flemish and French authorities also thought that “clear” is better than short and registered vlaamsagentschapvoorpersonenmeteenhandicap.vlaanderen (42 characters) and commissioncommunautairefrançaise.brussels (32 characters).

Another fun fact: apparently, a lot of people were curious about the identity of the domain owner of Belgische-bieren.be, as the domain name was searched no less than 192 times using DNS Belgium’s WHOIS feature. Sexyplaces.be (167 searches) and callboys.be (133 searches) also sparked the curiosity of many Internet users. But Calltoys.be tops the list, with 433 searches. And for those wanting to know: the owner of that domain is a production company called Woestijnvis nv!

Are you also interested in a domain name that sounds good for your new project? Check out the various options with traditional domain extensions such as .be, .vlaanderen or .brussels, combined with your favourite keyword, or one of the many new domain extensions. Our tips to pick a good domain name will put you on the right track!

Coming up with the right company name using a name generator

You recently had a great idea for a product or company. But what should you call it? A name generator can help you come up with the right company name....

There are many domain frauds in which fraudsters use your domain name as bait to deceive you. We list some specific cases of domain name scams as a warning, and...